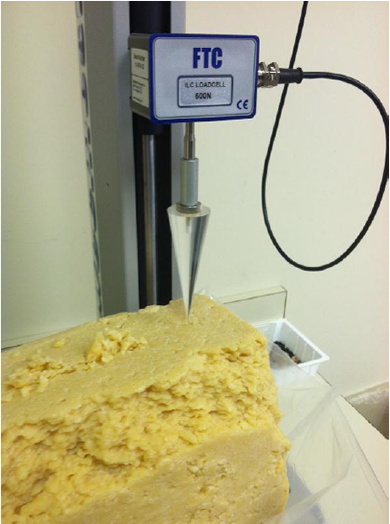 Measuring fracturability and cohesiveness of Parmesan cheese blocks in order to predict if the cheese will shred well or not.

This processor produces blocks of hard cheeses which are sent to either be shredded or grated as end product. The processor had issues with some of the blocks fracturing and crumbling when on the shredding line. They needed to determine beforehand the cheese's texture in order to decide if it was best for the shredder or grater. Highly fracturable and crumbly blocks were sent to be the grated end product, whilst those which kept their shape and stayed together were ideal for consumer shredding.

Testing was performed with a TMS-Pro Texture Analyzer, a 500 N load cell and a 20° clear Perspex conical probe. The 3 blocks of cheese were tested at 45° F. The blocks were not cut into smaller samples in order not to cause fractures/breaks. The testing program was written to start with zeroing out, then run down to sense the top of the block before beginning the penetration as the blocks were not uniform in shape. The probe ran into the cheese until 50 mm at a speed of 250 mm/min, and then returned to its start position. The graph to the right shows 2 samples of each product tested.

The TMS-Pro texture analyzer system proved to detect the differences among the three cheese products and through numerous samples, proved to be consistent and repeatable.