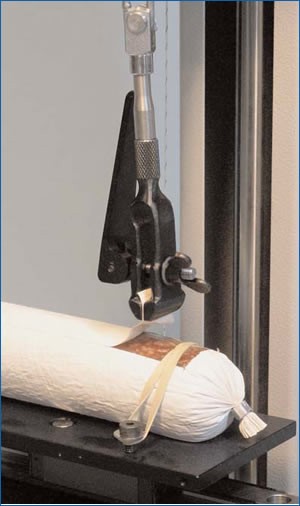 A Dutch salami producer required a method to reproducibly quantify the peel profile of artificial sausage casings. The method had to take into account:

The information generated was used in cross-comparison with natural sausage skins and in optimizing maturation and fermentation of the finished product. For example, the bacteria used to coat casings, drying of the internal meat, maturation times as well as actual peel properties of the sausage skins.

The force to initiate and maintain the peel of a salami skin was measured in a reproducible and consistent manner.

The FTC Assisted Peel Table, coupled with good experimental design, generated reproducible results from the samples tested. A constant 90º angle was held at the test interface whilst the Peel Table facilitated controlled movement of the sample. The TMS-Pro system identified a number of interesting events during analysis relating to the peel profile of the salami samples. 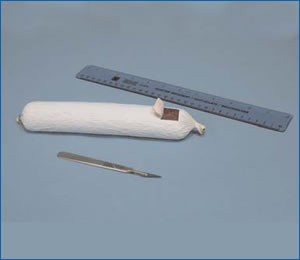 Peak Force - Variation in sample processing and handling can be measured.

Analysis has provided objective information relating to the peel profile of the salami samples. A large amount of information can be drawn from the investigation, which in turn can be correlated to the process variables, such as maturation time, fermentation and skin formulation.

The parameters of Mean Peel Force and Work were most accurate in predicting peel profile of the sample and should be used in future investigations. The test was representative of treatment by the consumer, quick to set up and easy to repeat.

Overall the objective was met through good experimental design and understanding of the test application. Future studies should build upon these expectations and be used to measure the effect of actual process variations.