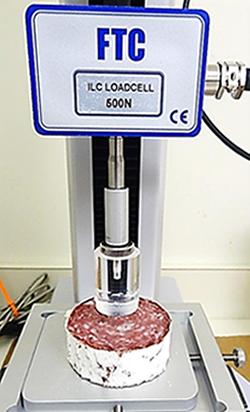 Meats contain mostly muscle (with directional fibers) plus fat, which will vary from cut to cut, making it a non-homogenous foodstuff in it most natural form. Reconstituted meat-based product – such as salami - may comprise ingredients from different meats as well as fats and other additives. To guarantee the consistent firmness of salami, an understanding of how certain processing parameters affect the final texture of the product is essential to the food producer. Different cooks, cuts and grinds can be evaluated to some degree by subjective sensory testing, however with such a potentially variable product, a more objective scientific approach to firmness measurement will enable more control over the production process – and a more consistent texture for a given set of ingredients. For this analysis we were provided with representative samples from two recipes – named ‘Felino’ and ‘V3’ – one batch each of desirable texture and another graded as out of specification (“off-spec”) for which the processing variable was that of having a greater coarseness of the grind. 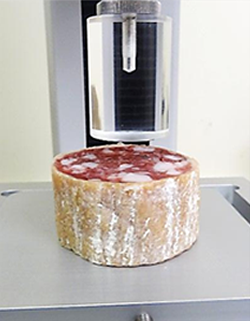 A Food Technology Corporation (FTC) TMS-Pro Texture Analyzer was used, fitted with a 500 N intelligent loadcell and a 25.4mm (1”) perspex cylinder probe. This fixture choice ensured that the sample surface area in contact with the probe was large enough to compress both meat and fat deposits simultaneously - important for an accurate indication of the overall texure. The sausage was sliced into 1” cylinders using a cutom-made jig and oriented on the plattern such as to expose the inner core flesh to the compression probe, which was the specific part of interest. All samples were allowed to equilibrate to ambient temperture (about 72°F) before being sliced and tested.

The FTC TL-Pro test program moved the probe down until it came into contact with the sample surface and set the readings to zero. The probe was then moved into the flesh an additional 10mm at a constant speed of 250mm/min. The software automatically calculated the peak force applied, representing “firmness.” The work done (energy spent), represented by the area under the curve, was also calculated as a measure of the differences in the texture of the samples.

The graphical representation from TL-Pro, of the test results for a representative curve for each of the 4 samples, is shown here (force applied, against cumulative displacement). 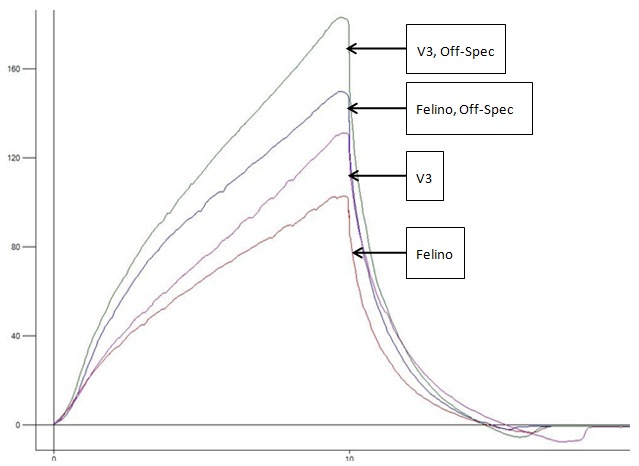 For both formulations, the coarser, off-spec, samples required a greater compression force which is clearly visible from the curves.

This method visibly demonstrates the value of objective measurement of the texture of a product which has a non-homogenous structure and a number of variables in its processing. There is a direct correlation between grind and firmness; the samples with a greater coarseness not only producing an increased firmness, but a significantly greater variation in that attribute due to the larger particulates. The pre-determined grading as to what is desirable to the customer allows the meat producer to establish an acceptable range of firmness for good product which is also valid across different recipes (curing, fermentation and drying parameters). Once the range is established, it can be entered directly into the TL-Pro software and allow the system to give a clear PASS/FAIL indication.