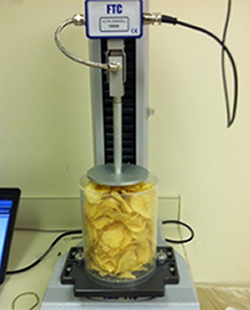 The following data was gathered for a potato chip processor, in an effort to come up with a consistent and objective way to evaluate their potato products, specifically its hardness. Current methods include mostly subjective, sensory testing. While sensory is important, it is subjective and varies from person to person.

Three different samples were evaluated. They were as follows: 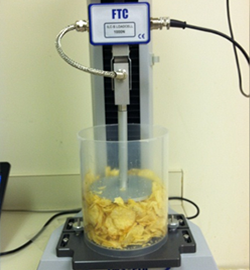 All testing was done using FTC’s TMS-Pro Texture Analyzer, fixed with a 1000N Intelligent Load Cell (ILC) that was fitted with a custom setup designed by FTC. The actual fixture setup for the test included a 100mm compression plate and a plastic cylinder approximately 125 mm in diameter and 165 mm tall to contain the chips while they were being compressed. As potato chips are a product with extreme variation from chip to chip and bag to bag, the method had to be designed in a way that took this into account, while still being about to consistently measure the texture of the product overall.

Each test replication involved the TMS-Pro doing 4 compressions to increasing levels of displacement. Each compression was at a speed of 1000 mm/min. The displacements were 120 mm, 100 mm, 80 mm, and 60 mm respectively. The displacement is based on the distance from the bottom of the container; which in this case was set to be absolute zero. After each compression, the system relaxed or backed off 10 mm from the compression displacement. The test program was designed to mimic the act of chewing. Once the test was complete, the work (or area under the curve) needed to for the system to “chew” the chips was calculated using the Texture Lab Pro software.

Individual food items may be tested for fracturability to measure crispness, this method of bulk testing provides a valuable overall hardness value.

Each individual peak represents a compression cycle. As each cycle goes to a further displacement, each peak is higher than the one previous. Looking at the graph, it appears that we get the clearest definition between the 3 products in the last compression cycle. 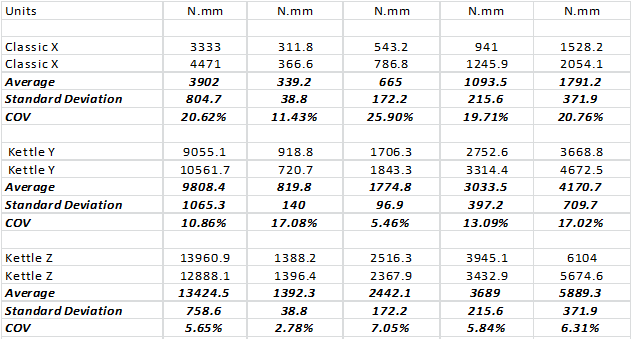 The table of results shows the work that was done during the test for each compression and the total of the 4 compressions. Based on this data, the total amount of work done gives the best overall picture of the product when trying to make a differentiation between the 3 sample groups, specifically the two kettle style chips. In comparing the averages of sample Y and sample Z as a percentage, sample Z requires more than 25% more work to compress the sample 4 times than does that of the 11776 samples. Based on our past experience in texture testing, this would be considered a significant difference. The standard deviation and coefficient of variation (COV) is higher than we would like to see but that is due the inherent variation in this product. Also, these results were produced with a limited amount of product. Additional replications should narrow the results to more acceptable levels of variation in the data points.

Based on our results, a significant difference between all three products can be produced using the above described method. The final data concludes both kettle style chips require more energy to “chew” than the regular style chips. Furthermore, it can be concluded that the sample Z Kettle chips require more energy in this test than the sample Y Kettle chips. Utilizing the client’s terminology, the sample Z chips would be considered to be harder. This was the expected result and the point of most interest to the customer.

While the product is quite variable and will need multiple replications to obtain good statistical data, the methodology for this application is capable of producing consistent, repeatable results. This consistency was accomplished by increasing the sample size to a point where the extreme variation from chip to chip in regards to size, shape, starch dispersion, water dispersion, etc., did not have as much of an effect on the overall texture of the product. Being able to evaluate the samples as a whole, instead of on an individual chip basis is important as the consumer generally quantifies this product overall and not individually.