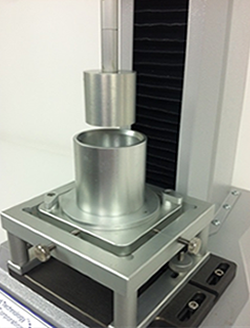 The following data was gathered for a manufacturer of mayonnaise in an effort to develop a repeatable method for comparing their regular and low fat products. Currently, the product is evaluated using rudimentary sensory methods. While sensory is very important, it is subjective and varies from person to person.

Both a full fat and low fat version were provided to Food Technology Corporation (FTC) for sampling. The goal was to be able to show a difference in the product in a consistent and repeatable manner. Once a target range for product is established using the developed methodology, the producer will be able to make quick decisions based on objective measurements. 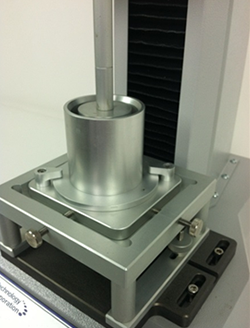 All testing was done using FTC’s TMS-Pro Texture Analyzer, fitted with a 25N Intelligent Load Cell (ILC). For this test, the Dual Extrusion Cell was used as extrusion is a preferred method in measuring the rheological consistency (texture parameter viscosity) of a semi-solid product. The results correlate well to the desired flow behavior of an oil emulsion colloid. The consumer-perception of creaminess is reflected by the viscous nature of the product. This cell consists of three sample cups, 5 different diameter plungers (1 for forward extrusion, 4 for backward extrusion), and 4 cup bottoms (3 with different size orifices for forward extrusion, 1 solid for backward extrusion). For this application, the back extrusion setup was used. This allows the product to flow up and around the plunger as it moves down into the product.

Each replication first involved allowing the product to equilibrate to room temperature (approximately 70°F). Once a consistent temperature was reached, 50 grams of product was scooped into the sample cups. Three samples were prepared at once, first the regular product and then the low-fat product. The replications were performed as quickly as possible to avoid any variances that change in temperature could effect. For each replication, the plunger travelled to a position that was 10mm from the base of the sample cup at a speed of 250mm/min. After the down-stroke, the plunger moved at the same speed back to the original starting point. The work (area under the curve) was calculated for both the down-stroke and the up-stroke in order to also measure the force exerted by the mayonnaise remaining on the lower face of the plunger - indicative of the thickness and adhesion of the sample.

One can see that there is a clear separation between the two sample types. This graph shows that it took more force to displace the regular product than it did for the low-fat product.

As with the graph, one can see a clear difference in the two samples in comparing the averages of the replications. The compression numbers represent the work that it took to move the plunger to a set position. The higher the number, the more resistance the mayonnaise provided. One can see that the regular product required significantly more work than did the low-fat product. This trend holds true with the retraction work as well. The regular product required more effort to move the plunger back to the original starting point, indicating greater adhesiveness, which affects spoonability of the product during serving. One other thing to point out is the coefficient of variation (COV). Typically anything under 10% is considered a valid test. While both of the samples fell well within this range, it’s should be pointed out that the low-fat product had a very low COV, indicating that it is more consistent than the regular product. The graph confirms this outcome as all of the low-traces are almost exactly the same.

Based on these results, a significant difference between the two products can be produced using the described methodology. While we were able to show a significant difference in these two samples, perhaps the more valuable data to the producer would be to look at how closely the low-fat product reflects the texture of the regular product. Often times with a reduced-fat product, the goal is to make it as much like the standard product as possible. An objective way to measure this is crucial in the process as one must be able to consistently measure something if there is any chance of controlling it. Armed with this new data, the processor can now make more informed decisions when it comes to their processing operating procedure as it affects the overall texture of the product.