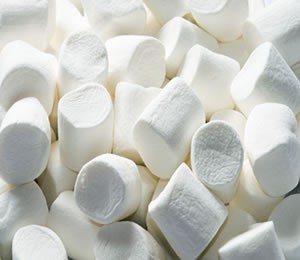 Our client produces a marshmallow product, for which the texture (firmness) is a key factor. Their testing method had been a simple sensory method of squeezing the product in the hand, but this did not provide objective data that could be fed back into the manufacturing process.

We provided test data on some samples to demonstrate how mechanized texture analysis could give instant acceptance testing and feedback into the ongoing manufacturing process for real-time adjustment.

The customer was also interested in seeing how a thermal process affected the final texture. Because of this, it was necessary to test a control sample against a heated sample to show the difference that heating causes. 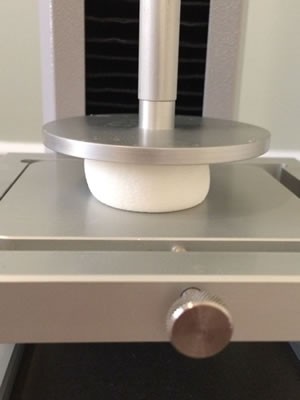 The demonstration testing was done using Food Technology Corporation’s (FTC) TMS-Pro Texture Analyzer, fitted with a 500 N intelligent loadcell and a 75 mm compression platen.
Two sample groups of marshmallows were used: three controls (un-reheated) and three that had been reheated for 10 second in a microwave oven to a temperature of 100°F and tested while hot.

For each sample, the test program moved the compression platen down until it touched the surface of the marshmallow.

It then compressed the sample at a speed of 250 mm/min to a distance of 15 mm before returning the platen to its starting position at the same speed. The FTC TL-Pro software automatically calculated the peak force applied, or “firmness.” Additionally, the work done (energy spent, or area under the curve) was calculated as another measure of differences in the texture of the various samples.

The graphical representation from TL-Pro, of the test results for the six samples, is shown here (force applied, against cumulative displacement).

The two sample groups are clearly distinguishable and each group is fairly consistent. The upper set of traces is the control product and the lower set is the heated product. This significant separation in the two sample sets is an ideal outcome when measuring a textural difference caused by a variable. The slightly greater inconsistency in heated samples may be due to variation in the cooling rate during testing.

Based on the data gathered, it can be seen that this is a valid methodology for testing the product. It is also clear from the results that the heating process has a significant effect on the final texture. It took three to four times the energy to compress the control samples as the heated samples.

Being able to accurately measure, and therefore control, even minor difference in the final texture of the product is very important to the producer. By correlating the mechanical testing with the customary manual sensory data, an objective target range for a desirable product texture can be established. This range can be entered into the texture analyzer to provide immediate and accurate PASS/FAIL readings, allowing timely adjustments to be made in the process and formula.