The two products were essentially the same, the difference being the flavor. The problem was that even though the process was the same, the final texture of each was different. The different flavoring ingredient was thought to be the cause. Because they did not have an objective way to measure the differences, there was no way to confirm this. 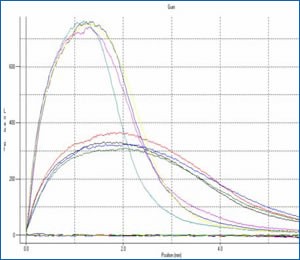 It was determined that using the 3-point bend fixture for testing was going to give the best results. This basically replicates the treatment of the consumer when they put the gum in their mouth.

Each sample was deformed to the same displacement. At the end of each replication, calculations of the peak force and work (area under the curve) were done.

From these two measurements and the overall picture that the graph gave, we were able to show a significant difference in the two variants of the same product.