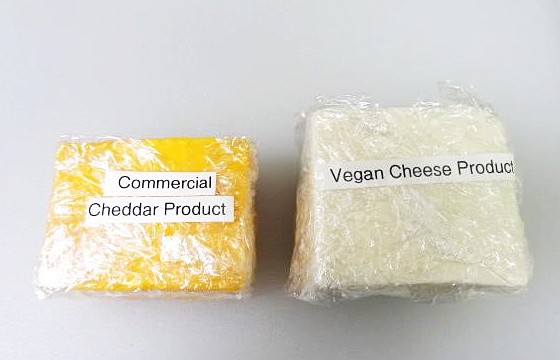 As consumers’ diets change, for ethical or health reasons (by choice or recommended), food producers are faced with the challenge of meeting the new requirements, whilst often striving to preserve the established texture. The vegan diet avoids dairy products, but cheese is extensively enjoyed by the modern consumer and so a product that combines a good taste with mouthfeel equivalent to the dairy original makes commercial sense. We set out to determine if a Food Technology Corporation (FTC) food texture analyzer can be used to measure the firmness of alternative cheeses and thus become part of a consistent and repeatable evaluation method. This test compares the texture of a commercially produced Cheddar product to that of a vegan-approved variant. 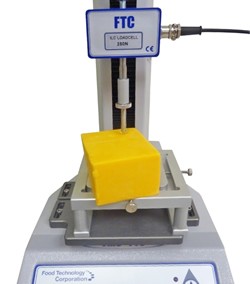 The FTC TMS-Pro Texture Analyzer was fitted with a 250 N intelligent loadcell and a 6mm diameter probe of lightweight stainless steel. Each cheese sample was tested directly out of refrigeration, 54° ±1°F (12° ±1°C, approx.). For each test, the Texture Lab Pro software program moved the probe downwards until contact with the sample was detected, where load and displacement were zeroed. The sample was penetrated to a depth of 15mm at a constant speed of 300 mm/min. On completion of the down stroke, the probe was moved up at the same speed to a position 5mm above the surface of the sample. Additional replications were then made in rapid succession in order to get a better overall average of the firmness of the samples. At the completion of testing, the software calculated the peak compressive force (firmness) and calculated the area under the curve, representing the total work done (energy) during compression.

The graphical representation from TL-Pro, of the test results for 3 samples of each variety, is shown here (force applied, against cumulative displacement).

The control and vegan sample curves show a distinction and the individual curves for each are very closely clustered, as expected for multiple readings on a largely homogenous product. One test on the vegan alternative recorded an anomaly, which was subsequently found to be an air bubble within the product. The overall shape of curve for both cheeses shows a rapid slope during initial compression, followed by a linear increase. As the probe is retracted, the adhesion of the product causes a tension force to be recorded, indicating stickiness.

Consistency in the results shows that this procedure is a repeatable and reliable method of testing the texture of cheese. The comparison clearly indicates that the vegan alternative is less firm than the traditional sample, and also less sticky – providing reduced adhesion between the sample and the probe’s compression face. A conclusion could be that the vegan product is more crumbly and less moist than the traditional recipe, probably by nature of the fat content, which differentiates it from the non-dairy product. This test shows that by the use of a texture analyzer, the processor will be able to have a better understanding of how changes in formulation can affect the final texture of the product. This knowledge may be used to optimize their vegan product range to more closely emulate any traditional cheese variety in terms of texture.