The following customer data was gathered in an effort to develop a more objective way to evaluate the texture – firmness - of canned carrots in their final form. Currently, the processor relied on a subjective assessment. The ultimate goal of this method would be the ability to correlate objective numbers to the subjective sensory data and make recommendations for packaging and canning.

Tests were performed with a FTC’s TMS Pro Texture Analyzer, fitted with a 2500N Intelligent Load Cell and a CS-1 Standard Shear Cell. This particular cell is designed to test products in a bulk form instead of doing one piece at a time. Testing in bulk generally produces more consistent results as it takes into account more variation that occurs from piece to piece.

Each test replication involved draining the carrot samples and allowing them to sit for 90 seconds. 100 gram samples were measured and placed in the CS-1 Shear cell. Once placed in the texture analyzer, the Texture Lab Pro software moved the blades of the test cell down at a speed of 250 mm/min to a distance that was far enough to ensure that the product was completely expressed through the bottom of the test cell. Upon completion of the test cycle, the software automatically calculates the peak force of compression or “firmness” of the sample. In addition, the work (area under the curve) was calculated as an additional defining factor, though in this particular test only the firmness value was used. 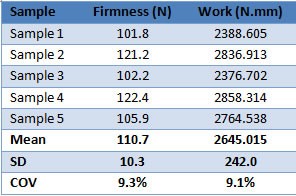 On the right is the graphical representation of the samples that were tested. The X-axis is displacement and the Y-axis is force.

This graph shows 5 replications of the same sample.

The table below the graph is showing the calculations.

This table of results shows both the maximum force incurred during the test (Firmness) but also the area under the curve (Work) in the graph traces above. The results are fairly consistent as would be expected when only testing a single product. The variations are most likely caused by the product’s orientation in the can during the retort process. Product cooks different depending on whether it is in the top, middle, or bottom of the can. While these differences are minimal, the sensitivity of the stand allows it to capture this minor variation. While the variation is a little high for a single product test, the consistency of the results would be narrowed with additional replications.

Based on these results, it can be determined that this methodology is a valid way to measure the firmness of a canned carrot product. While additional testing would be needed to confirm this, a coefficient of variation (COV) of less than 10% is within the acceptable level of variation for food texture testing.