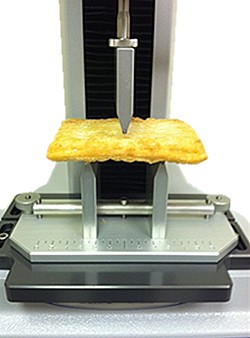 The following study was performed to show the textural differences caused by variation in the cooking methods of the breakfast pastry toaster strudel. Currently, the producer uses sensory in determining how different cook times can affect their product. Their goal is to rely less on the subjectivity of sensory and apply a test method that is more objective. Food Technology Corporation (FTC) was tasked to develop a method that would allow them to do this in a consistent and repeatable way.

Each test replication involved the upper fulcrum moving down to a displacement of 40mm at a speed of 250mm/min. This displacement was selected as it was far enough to cause the samples to break. Samples were prepared in the 3 groups.All testing was done using FTC’s TMS-Pro Texture Analyzer, fitted with a 250N Intelligent Load Cell (ILC). The fixture used for this particular application was the TMS Light-Weight Three Point Bend. This fixture works by supporting the sample between two fulcrums and then using another fulcrum to bend the sample. Even though this test is designed to evaluate the crust of the product, the inner filling is going to affect the results somewhat. This has to be taken into consideration.

This was done in order to show how a change in the cooking method affects the overall texture of the crust of the product. After toasting, the samples were allowed to equilibrate to ambient temperature so that any variation would not affect the results. 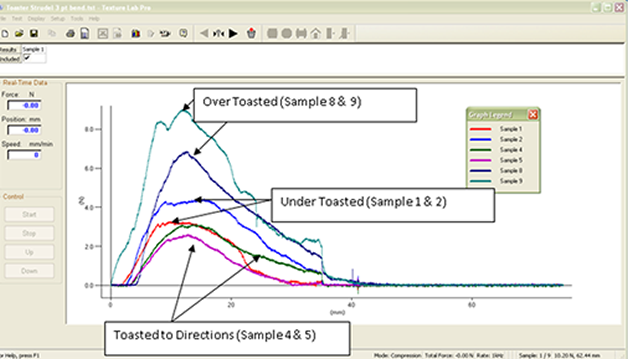 While these results may not be conclusive, further testing would likely produce similar results for the three different cook methods. Once the acceptable ranges of the target product have been established, the producer will have a better understanding of how variations in cooking can affect the final product.