The following data was gathered for a large bakery producer that makes items for the food service industry. They were interested in both the firmness of the product and how it holds its shape (elasticity). Their current method was a simple sensory evaluation that could be very subjective.
Food Technology Corporation (FTC) was asked to come up with a consistent and repeatable method that would allow them to make more objective measurements. As a supplier to a major chain, it is imperative that the processor be able to make a consistent product on a daily basis.

All testing was done using FTC’s TMS-Pro Food Texture Analyzer, fitted with a 50N Intelligent Load Cell (ILC). The test probe was 12.7mm cylinder made out of black plastic. As all of the samples were the same upon receiving, they were separated into two groups. The first was tested fresh, while the second group was allowed to stale overnight.
Before testing, the frozen product was allowed to thaw at room temperature. Each test replication involved the TMS-Pro first coming down at 50mm/min until it finds the surface of the sample. It would then penetrate into the sample 15mm, return back to the zero position, and penetrate again. This was a 2 step penetration test. The second penetration allows the measurement of elasticity of the samples.

The graphs below represents the samples that were tested. The X-axis is displacement and the Y-axis is force.
The most apparent difference in the two sample sets was in the work of the first compression. The average for the fresh product was 85.5 N.mm while for the stale product, it was almost double, at 136.9 N.mm.
There were some differences in the peak force but because of the variation within the product, we feel that the work would be a much more consistent measurement, as it takes into account a large area and not just a single point. The average elasticity of the two products was almost identical, even after allowing the stale ones to sit out overnight. 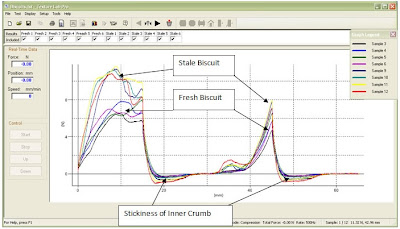 Posted by Food Technology Corporation at 08:29

Promote Your Page Too